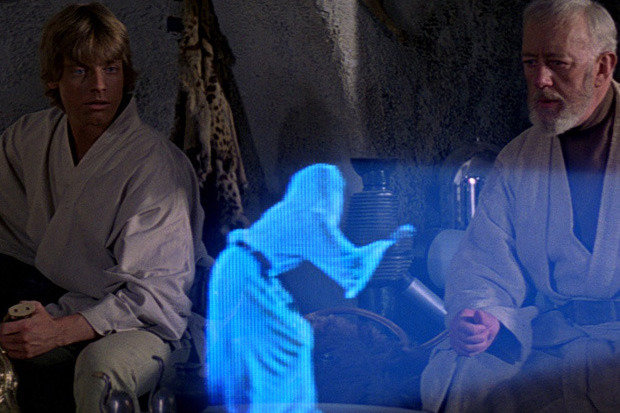 Smartphone-based augmented reality (AR) and the AR headset explosion will bring 3D holograms into our lives everywhere. Meanwhile, though, the real AR hologram revolution is being ignored.

A hologram is a 3D virtual object that isn’t actually “there,” but looks as if it were, either floating in the air or standing on a nearby desk or table.

The “holo” in Microsoft’s HoloLens headset is a reference to holograms. And when we think of these future AR holograms, we think of headsets, goggles such as HoloLens or smartphones running applications created with Apple’s ARKit or Google’s ARCore.

The technology is increasingly becoming ubiquitous, and companies are racing to win market domination. A competitor to the HoloLens, the “Lightware” headset from secretive Magic Leap, has been in the news lately, after six years of development at a cost of $2 billion, for two reasons.

The first is that the company unveiled the “Creator Edition” of the headset in December. Now we know what it looks like: something right off the cover of a vintage sci-fi novel.

The second reason is rampant speculation that Apple might buy Magic Leap to accelerate its own AR goggle development, speculation driven by Apple analyst Gene Munster.

In other hologram headset headlines, Dell this week announced that it will start selling, on Feb. 15, the $1,495 Meta 2 developer kits, which include the Meta 2 AR headset, for business deployments. The company said the Meta 2 is supported by several business-class Dell Precision Workstation PCs.

The AR smartphone app experience is emerging now — and the AR headset world is getting closer every day.

So that’s the story on phones and goggles, but what about that “real AR hologram revolution” I mentioned earlier? I will get to that, in the second half of this column. But first, let’s address a basic question.

What are holograms good for, anyway?

Think of hologram displays as the next step in making digital content more human-compatible.

Humans see the world in 3D. Our computer and phone screens show us a 2D version of the world. It’s artificial.

If I look at a concept car design on my laptop, people on the other side of the room see only the back of my laptop lid. That’s artificial, too.

A hologram projected in the middle of the room could show a 3D concept car for all to see, as if it were a physical object actually there.

The biggest applications for holograms are for enterprises, such as what I described above — 3D presentations for conference rooms and meetings.

And while we’re deploying holograms in the conference room, we might as well beam live remote meeting participants into the meeting — holographic telepresence.

Holograms will also dramatically improve training, design and visualization in enterprises. The ability to look at, zoom in on and manipulate 3D versions of in-progress designs radically enhances the design process.

And, of course, in the marketing department, holograms will thrill customers with experiential marketing campaigns and customer experience interactions.

We’re already seeing applications for all these emerging for smartphone, tablet and headset AR. But the real benefits come when holograms are liberated from such devices.

Holograms without phones or headsets

While dozens or hundreds of major hologram research projects are currently being developed in corporate and university labs around the world, the first examples of this new category are already shipping — or are available to corporate developers.

A company called Realfiction makes an AR product called DeepFrame. The product is basically a 64-inch glass window that you look through to see the real world plus 3D holograms and AR images and text. These objects can be projected to appear a few feet away and a few feet across or miles away and miles across — for example, across an entire city.

DeepFrame enables all kinds of science fiction-like applications, such as 3D telepresence (making it appear almost as if people are in a meeting, when they’re in fact on the other side of the world).

DeepFrame is currently sold to enterprises but could eventually be used for retail experiential marketing purposes. (DeepFrame costs approximately $50,000.)

Another approach to AR hologram creation is already shipping from HP. That company now sells a special 23.6-inch display product called the HP Zvr. The $4,000 device was made in a partnership with a company called zSpace.