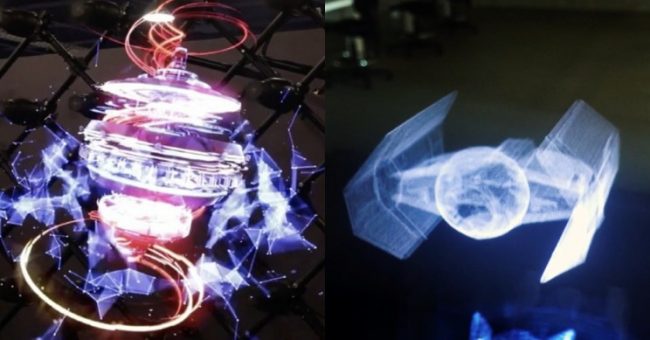 Holograms have been a dream of tech and entertainment companies as well as consumers ever since Jules Verne first introduced the idea of the technology back in 1893. But the popular craving for such devices really came into vogue when Princess Leia appeared as a floating image in Star Wars over forty years ago. Unfortunately, for years it looked like such things were going to be forever relegated to the realms of science fiction. The challenges of creating a 3D image in the thin air simply seemed insurmountable.

Finally, however, it looks like we are approaching the day where that dream of real holograms may actually become a reality. Scientists around the world have come up with new and inventive ways to use lasers, modern digital processors, and motion sensing technologies to create several different types of holograms which could change the way we consume and interact with media in the very near future.

Here is our list of some of the coolest holographic technologies around today. Check it out, and share it with your friends to help the technology reach the mainstream, because as Princess Leia said, “You’re my only hope.”

Until recently, any “hologram” examples have required glass, smoke, or water to bounce light from, but not anymore. A company known as Aerial Burton has created a holographic projector that uses a plasma laser to float a 3D image in mid-air. At the moment it’s very rudimentary stuff but it shows that light can be viewed without the need to bounce it off a surface. The technology uses a 1kW infrared pulse laser which is focused on direct points in the air via a 3D scanner causing the molecules in the air to be ionized to create a plasma. While this tech is rudimentary right now it’s an important step in the right direction to ubiquitous holographic displays in thin air.

If you’re a fan of music, then this is one hologram you are probably familiar with. It’s an old technology of illusion, but new designs have made it awesome. Pioneers of something they like to call “digital resurrection,” MDH Hologram was the first company to master photorealistic and flexible hologram technology for performance venues. It can be incredibly realistic too, as proven by the holograms of Tupac, Michael Jackson, and even Indian Prime Minister Narendra Modi. Using high-end motion capture technology and full 3D CGI they completely recreate a person from head to toe, then projects them into a nearly invisible pane of glass.

You may have seen rudimentary forms of this technology before at theme parks or special events. They work using small propellers merged with high tech RGB lights that can switch colors in milliseconds. When spun at the right speed they can be used to create an image with a 3D effect. Recently a new device known as The Hypervsn Wall has emerged which takes this technology to the next level, creating fully HD images over 3 meters tall that at least give the appearance of floating in the air, all while using a mere 65 watts of power.

These are the types of holograms you might have seen in children’s museums growing up, but they are becoming more advanced by the day. It used to be that a round mirror could project the illusion of a 3D image from the right angle, but now researchers are using LCD screen advancements to create machines like the HoloPlayer One, which sends 32 views of a given scene towards their designated directions simultaneously. This creates a “field of light”, which a scene that occupies the same physical volume would have given out. Paired with a depth-sensing camera allows a user to interact with the hologram just like they might with a real object or touchscreen.

Admittedly, the world of Tony Stark holographic tables is still years ahead of our current technology, but recently a team out of South Korea made an important step in that direction. They created the world’s first hologram capable of being viewed simultaneously in 360 degrees by using a series of multi-colored, high powered lasers and a high-speed rotating mirror display that could be built into, you guessed it—a tabletop.

In a slight departure from the traditional idea of a hologram (but still incredibly cool in it’s own right), researchers at MIT created a tangible informed dynamic shape display called inFORM that can render the shapes of people and objects on 2D surfaces. To do this it uses up to 900 motor driven columns in a tiny area that are capable of sculpting shapes in real time. Most importantly though it looks SUPER COOL!

The technology for this type of hologram has been around for years and even used extensively by magicians and filmmakers, but it to an artist to perfect it. Joanie Lemercier uses 2D projections paired with a motion sensor to give the impression and functionality of a 3D image that is incredibly high-def and realistic feeling. And since it is tracking the motion of the viewer and not a camera, no headset or screen is required.

Though not true 3D holograms like the Digital Holographic Tabletop above, there are a couple other holographic table products worth mentioning as they are available right now and very cool. The Euclideon Hologram Table is an immersive, multi-user system that coordinates atoms of light with an incredible algorithm that can handle 1000GB of graphics data, creating stunning visuals. Unfortunately, it does require special lenses to use.

Then there is the Hololamp, which is the first glasses-free hologram table. It creates a projection on a flat surface that can be manipulated manually by a motion tracking scanning camera. More user-friendly, but not quite as cool looking.

Possibly the coolest looking current holographic technology, Volumetric holograms like those created with the Voxon VX1 display use an ultra-high-speed digital light engine and a highly-optimized volume rendering engine to project over half a billion points of light into a volumetric space every second. Hundreds of digital cross-sections of an image are projected synchronously onto a specially designed high-speed reciprocating screen. As the photons of light hit the screen, they are diffused and form a physical cross-sectional image at precisely the right place in physical space, and our eyes are tricked into blending those layers together into 1 single, 3D image. No glasses required.

Don’t be fooled by its name, this is one of the most exciting developments in holographic technology ever. Researchers at the Digital Nature Group have found a way to create three-dimensional, interactive holograms comprised of tiny points of light plasma called voxels. They accomplished this using femtosecond lasers (a femtosecond is a quadrillionth of a second, and the lasers transmit bursts that last 30 to 270 femtoseconds), that can create 3D images with resolutions up to 200,000 dots per second. And since the plasma bursts are so fast, touching them won’t burn you.

Most excitingly though, these holograms are actually tangible—they can be FELT! But what exactly does a miracle of modern science—light bursting to life in brilliant images—actually feel like? Well, according to the team’s principal investigator, Yoichi Ochiai, it feels like sandpaper.

So, yeah, there’s still some work to be done. But hey, that’s science for you.